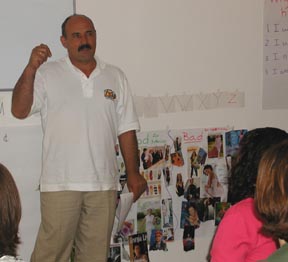 Working with the Meskhetian Turks, we are able to use both Turkish and Russian speaking interpreters. All of the Meskhetian Turk families speak Turkish as their first language at home. (I am told that it is slightly different in pronunciation and usage than standard Turkish from Turkey.) All of the families have lived under the Soviet or Russian system and thus speak Russian fluently as well. In fact, their brand of Turkish apparently mixed in a lot of Russian words and phrases. Most of the adults also speak Uzbek or Khazak because of their time in those regions. Now that they are in America, the group is working incredibly hard to learn English quickly and can already communicate fairly well. For the future, they expect that their younger children will grow up without Russian but will instead speak Turkish and English fluently.

The Turks have been quite pleased to have the chance to share some of their language with me and other World Relief staff and volunteers. Here a few of the phrases I have learned thus far: