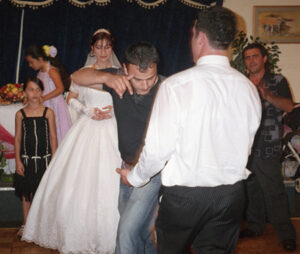 Given the importance of family networks, weddings are probably the biggest and most important community events in the Meskhetian Turk culture. Borrowing both from Muslim and Russian tradition, marriages usually consist of several stages. I have been privileged to celebrate a few of these events with families that I have gotten to know over the past years. 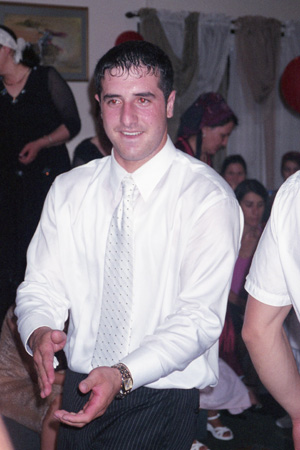 Russian Turk marriages are traditionally arranged by the family and in the past would have often involved a couple who had never even met.  This is less the case today though the influence of this tradition remains; it is still not uncommon for family members to initiate a relationship (especially for the women) and the couple may only interact infrequently prior to the marriage. Most importantly, it is the family members who make the proffer of marriage and the parents of the bride will first speak with community members about the reputation of a young man before letting their daughter accept.
Pre-wedding 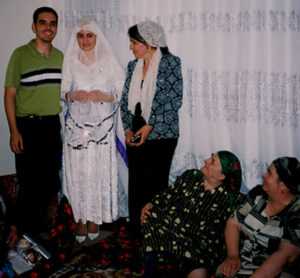 The wedding itself starts with the family of the groom going to the home of the bride to take her away from her family. (In the past this would have been the night before, but since the American context commonly involves a trip to another state it may be some time before.)  A party is held at the home of the bride where the men gather for a meal and prayer in a separate room as the women dress the bride in her wedding gown and prepare for the “giving away”. This might also be when the women decorate their hands with some intricate henna tattoos. 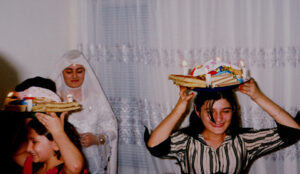 As the celebration continues, younger sisters or cousins of the bride will set trays of cakes and candy alight with candles on their heads and spin around in a festive dance.  Everyone then eats some of the treats with a promise of future marriage for the unwed who partake. 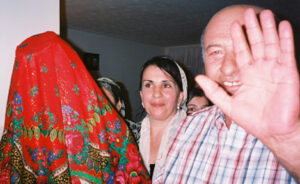 The party ends with the entrance of the soon to be father-in-law who must take away the bride. He is supposed to tie a rope around her waist to signify his ‘stealing’ her away but is not given enough rope by the family to do so. He must pay them money to receive more.

The bride is then covered in a red veil and led blindly toward the door as everyone follows with dancing and music. A family member may bar the procession, playfully refusing the prospective in-law to continue out the door until round of money is paid. The bride leaves the home to a fanfare of traditional Turkish horn and drums.

At some point that night or whatever day the bride arrives to her new husband’s household, the couple and family will meet in a small private religious blessing ceremony with an mullah. If the day of the wedding party, the bride will often again go through the process of being led out in a red veil to the place where she will put on her modern white wedding dress 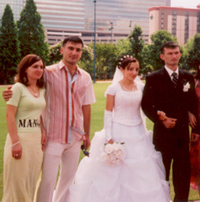 I am told that weddings in Russia will always involve a large caravan through the center of town for pictures in a park at a historical monument.  The Turks have borrowed this Russian tradition. After getting dressed, the bride and groom and family will head out for photos on the afternoon before the large wedding party.  In Atlanta the consistent choice for such pictures is downtown Centennial Park
Party entry 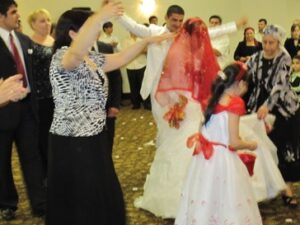 The real celebration takes place that evening as all the friends and family of the bride and groom gather for the toy or wedding party, a huge gathering traditionally held outdoors under an awning but now often at a local banquet hall. 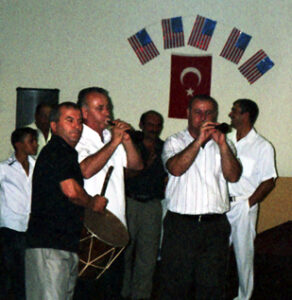 The banquet hall is divided into a men’s side and a women’s side with a main table and open dance floor in the middle.  Guests arrive to mingle and snack as they await the arrival of the couple. The bride and groom and their attendants (one for the bride and one for the groom) enter with a grand fanfare of horns and drum and proceed to the middle of the room. 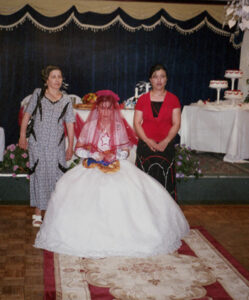 After entering, the bride must kneel on the floor wearing a belt laced with bread and holding handfuls of rice to symbolize future prosperity. The bride must remain stern faced with her eyes downcast throughout the night. She shows no emotion and her parents traditionally don’t attend in mourning for their “loss” of a daughter. 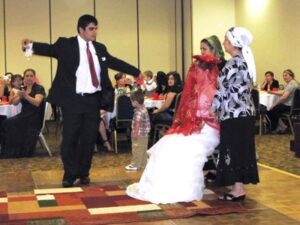 As she kneels, the groom’s best man approaches her in an artful dance with a set of knives and asks if he should cut her tongue.  This is acted out as he uses the knives to remove a red cloth from her head.  In tradition, it recognizes that she will no longer talk to other men. The red veil is then lifted (in the past letting the groom see his bride for the first time) and the couple and their two attendants take a seat at the main table.

(For those who might be a bit uncomfortable with all implied male-domination in these traditions, let me assure that much of it is play-acting by all involved. I watched one friend at her wedding trying to keep her required stern face of sadness during all of this accidently slip a grin and then remembering her role to be solemn.) 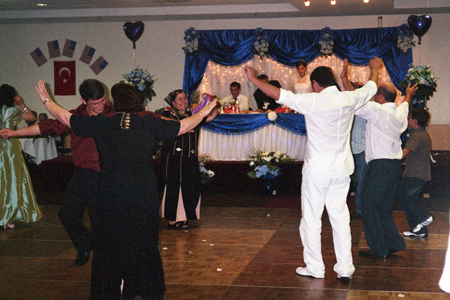 After this, almost the entire night consists of family and friends offering congratulations to the family.  The master of ceremonies will call up guests (individually or by family group) up to the front.  They will then take the microphone to offer congratulations to the couple and family. The master of ceremonies then yells “musika!” and as the music plays the well-wisher must move out to the center to begin a dance.

As families and individuals get out to dance, others friends will make their way out to the dance floor to join in and show honor to them. The music will continue until the main dancer decides to call it quits.  In the meantime, they and any of their friends have a chance not only dance to honor the couple but to show off their dancing skills as well.  This is the time that many will show off their regional traditional dances. 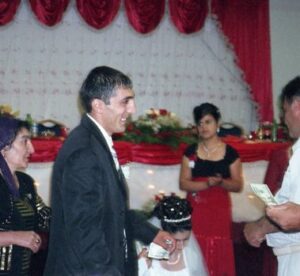 People do not give gifts of home items and such to a marriage couple as in the United States. Instead, one brings cash money to the wedding and it is either handed to the couple while dancing as seen here or passed to other family members at some point in the night. All this cash helps cover the cost of the wedding itself. (Of course some of the tradition was starting to change as families became more accustomed to gift registries and such.) 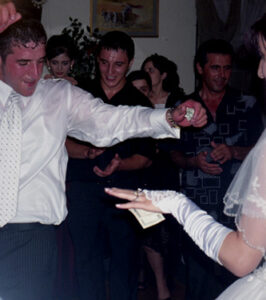 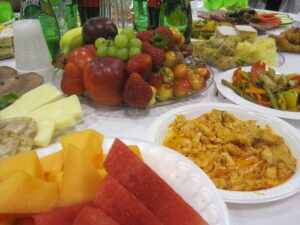 During the evening, everyone sits at tables laden with food. A special type of rice pilaf and beef is often prepared and served to all of the guests.  In other cases it might be lamb barbecue.

Meanwhile taking on another Russian tradition, the men at the wedding (but only the men) will often enjoy a bit of fine vodka and other drink. It’s an open secret but one is still supposed to keep this use of alcohol at a traditional Muslim wedding a bit reserved, especially if the mullah or other religious leaders are in view. 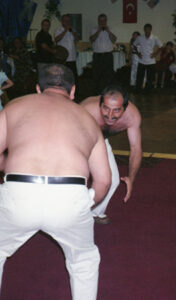 In at least one wedding I have been to, I was introduced to a quite surprising old Turkish wedding tradition: wrestling! In the middle of the dancing and celebration, everyone paused as two of the men literally took off their shirts and had a good-natured wrestling match. Though by no means usually included in modern weddings, all the guests knew the tradition and found it quite a bit of old-fashioned fun. 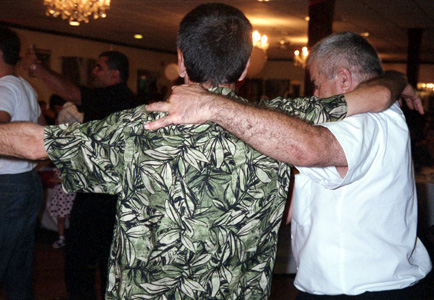 Once the individual congratulations and dancing are done, group dances in traditional style usually get started.  The men start first in a Turkish dance where they link pinky fingers and move around in circle with graceful steps as they rhythmically row their arms.  In the middle of the dancing, relatives of the marrying couple may call out individuals to throw some money down in the middle of the dance circle.  They may even drag out the groom to give him a toss in the air. 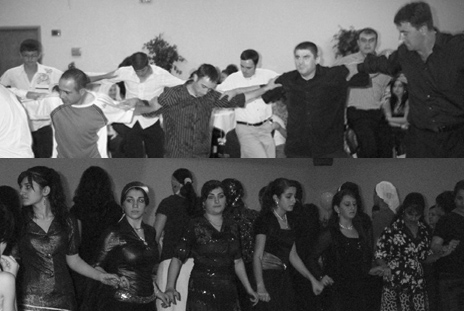 The dance gets livelier as the men move arm around the circle at increasing speeds.  Some may show off their particular flair for traditional Turkish, Uzbek, or Russian styles of dance which often involve a lot of fancy flying footwork! The women have similar group dances with graceful flowing arms and swirling dresses 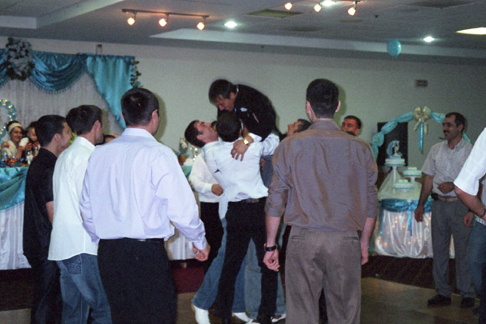 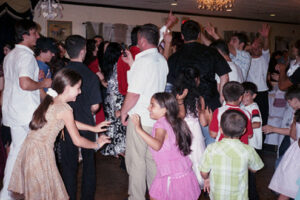 As the evening wears on, everyone eventually makes their way out onto the dance floor as the music transitions into popular Turkish pop or Russian dance songs.  Men, women, and children all enjoy a time of fun dancing as others talk and mingle. Others will take the opportunity to take a picture with the bride and groom. 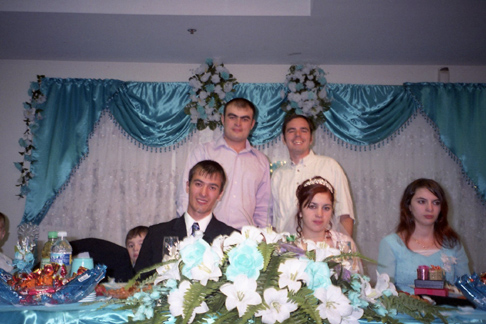 The dancing will continue for the rest of the evening until the bride and groom finally end the evening by cutting the cake and preparing to leave in a formal exit as everyone waves farewell. 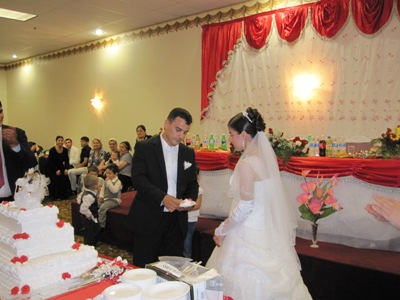